What do you think of when you imagine a lantern festival? Most may go straight to the illuminated lanterns when they think of Tianyu Arts & Culture, but there is so much more to appreciate at the company’s nationally renowned lantern festivals. With traditional Chinese performances, innovative displays, and a broad spectrum of multicultural cuisine, there is so much to enjoy beyond the lanterns. 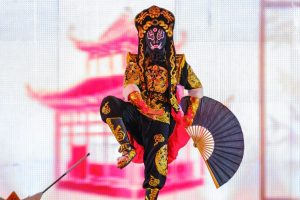 One of the biggest eye-catchers at the festivals is the authentic cultural performances that Tianyu provides guests. The ancient practice of Bian Lian, more commonly known as “face changing”, mesmerizes audiences. Wearing an array of brightly colored masks, the face changer changes appearance in the blink of an eye with quick, seemingly magic movements. The Diabolo (Chinese Yo-Yo) performance is a favorite among children. Watching the two-handed yo-yo fly high into the air never fails to entertain, and sometimes the performers even let the children try it out themselves! 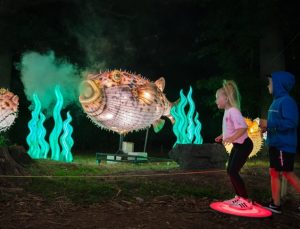 When it comes to the displays, some of the fan favorites are those that guests can interact with and immerse themselves in. One of Tianyu’s goals is to give patrons a fully immersive experience. The Philadelphia Chinese Lantern Festival showcased a dazzling bubble machine to make guests feel like they were underwater with a towering crab. At Boston Lights, the globefish (puffer fish) lantern features a button for guests to step on. The button fills the fish’s stomach with smoke and eventually blows it out of the mouth!

The corridor displays also offer guests the chance to surround themselves with gorgeous lights… literally! These massive, themed displays allow you to walk through a breathtaking tunnel of lights and are one of the most Instagrammable displays throughout the country. The Boston festival featured the premiere of a galaxy-themed corridor that sent guests into the far reaches of outer space while the Milwaukee festival matched their Alice in Wonderland theme with a tunnel that featured tea cups and kettles. Meanwhile, in Philadelphia, the dramatically colorful wisteria corridor provided a more natural, floral feeling. No matter the facade that these themes put on the corridors, they are some of the most immersive experiences that outdoor events can offer.

In between the lanterns and performances, delectable food and drink rounds out the Tianyu festival. Many festivals around the country partner with local and national food and beverage companies to offer their attendees different cuisine and drink options. The Raleigh venue partners with Kona Brewing Company, a Hawaii-based brewery, to bring a taste of the tropical oasis to a lantern festival in Raleigh, North Carolina. The Milwaukee festival’s variety of food choices stands out as well. While many of the festivals focus on Asian cuisine, Milwaukee’s China Lights incorporates American, Asian, and even Mexican cuisine into its food options. The festival also includes a food vendor dedicated to Wisconsin’s famous cheese curds!

Tianyu Arts and Culture works hard to make their festivals so more than what is expected. These festivals provide a diverse range of experiences that are suitable for a variety of audiences. With the combination of traditional Asian culture and innovative lantern designs, these festivals will leave any visitor talking about the festival until the next time it rolls into their city.